YUBA is traditional pressesed food of soybeans that is used for this product.

In Japan we were eating Yuba for about 1,200 years ago.

Penne is made from rice flower.

Dairy free gratin is made from our original sauce recipe. 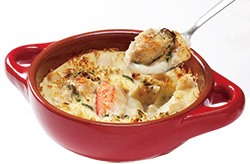 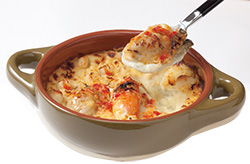 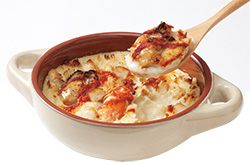 ・products that do not contain wheat,barley,rye,oats,gluten directly as raw material are defined as gluten free.
・Please consult your doctor before using it as food for the purpose of allevitaing Celiac disease.

Asian Oysters farmed ariund the Sea Of Japan.The Oysters are quickly
frozen so they maintain their fresh flavor.They are than coated with japanese traditional style breadcrumbs.
Breaded Oysters are a very popular part of Japanese seafood culture.
Enjoy “Oishii” Kanki Breaded Oysters or in English “Delocious!”

Cooking with a pan
①Pour a little amount of cooking oil into a pan.
②Pre-heat a pan gradually until 270 degrees Fahrenheit.
③Plece some breaded oysters onto a pan.
④Regulary turn them over to avoid burning during cooking for 8 to 10 minutes.
Cooking with an oven
①Put olive oil around Breaded Oysters in advance.
②Prehear an oven until 340 degrees Fahrenheit.
③Place some breaded oysters into an oven.
④Bake for 15 to 20 minutes.